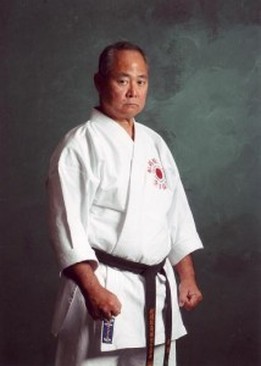 He started judo training in 1948 under Arakaki Sensei at the Fort Gakuen Japanese Language School in Honolulu, Hawaii. He attended Farrington High School in the Kalihi District and was on the football team and captain of the Territory of Hawaii (Hawaii was not a state yet) Championship swim team. While attending at the University of Hawaii on a swimming scholarship Funakoshi Sensei started Kempo training under Adriano Emperado from 1956 to 1959.

From 1966 to 1969, he trained under the third and last instructor sent by the J.K.A., the legendary Tetsuhiko Asai, another former grand champion from Japan. In 1969, after training 10 years under three of Japan’s top instructors and winning the grand championship of the Karate Association of Hawaii for five years in a row (1964 – 1968), Kenneth Funakoshi was appointed as the Chief Instructor for the Karate Association of Hawaii.
​
Funakoshi moved to San Jose, California to teach karate in December 1986, in 1987, the non-political Funakoshi Shotokan Karate Association was founded with its world headquarters now in Milpitas, CA and affiliates throughout the United States, Mexico, Europe, Africa, Middle East and South America.