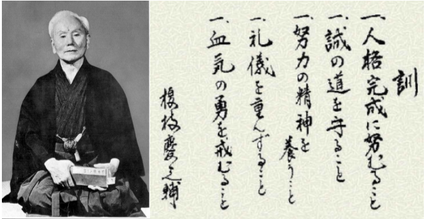 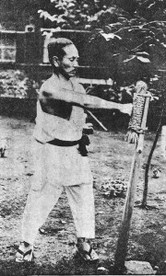 ​     Master Funakoshi Gichin was born on Nov 10, 1868 in Yamakawa, Shuri, Okinawa Prefecture. He was of samurai lineage, from a family which in former times had been vassals of Ryukyu Dynasty nobles.
By age 11 he had already made a name for himself in Ryukyu-style martial arts. Beginning his training under Master Azato Anko, it wasn’t long before he equaled his master in ability, and shared with him the distinction of being the “most accomplished” martial artist in the field. He also learned karate-jutsu (written with characters that mean “Chinese-hand martial art”) from Master Itosu Anko. Both his teachers were impressed by his nobility of character.

As over the years he pursued his training and continuously developed his remarkable skills, Master Funakoshi became chairman of the Okinawa Martial Arts Society, as well as an instructor at the Okinawa Teacher’s School. Then in 1922, when he was 54 years old, he introduced Okinawan karate-jutsu at the first Ministry of Education (now Ministry of Education, Science, Sports, and Culture) -sponsored Physical Education Exhibition. This introduction, the first ever public display of karate-jutsu in Japan, was a stunning success. And the previously unknown martial artist Funakoshi Gichin rose to instant fame throughout the Japanese world of martial arts.
Immediately, the founder of modern judo, Kano Jigoro, invited Master Funakoshi and his pupil Gima Shinkin to the Kodokan judo dojo to give a demonstration of kata. The highly-attended event filled the Kodokan dojo to capacity. It was so well-received that Master Funakoshi found himself pressed on all sides to stay in Tokyo.

Excited by the opportunity to further promote the martial art that he had done so much to introduce to Japan, Master Funakoshi subsequently began teaching it at Tokyo’s Meiseijuku, a dormitory for Okinawan students there. In 1922, he published a book entitled “Ryukyu Kempo Karate.” It was the first formal exposition in Japan on the art of karate-jutsu. Not only were its contents fresh and novel, it was also beautifully written, and immediately created an unprecedented karate boom.
As the popularity of karate-jutsu began to spread, Master Funakoshi produced the first ever “Dan Ranking Certification” in April, 1924.
Around the same time, with the encouragement of his teacher of Buddhism, Abbot Furukawa Gyodo of Enkakuji Temple in Kamakura, Master Funakoshi started practicing Zen. He contemplated the well-known Buddhist teaching that says “form is emptiness and emptiness is form.” He began to see the relevance of that teaching to his martial art, and ultimately changed the characters for karate from kara + te (“Chinese” + “hand”) to kara + te (“empty” + “hand”).

Then, in order to popularize the “local” Okinawan martial art in the rest of Japan, Master Funakoshi synthesized a complete system of techniques and theory, and changed the Chinese and Okinawan names of the kata into standard Japanese. In 1929, after much thought and reflection, he also changed the name of karate-jutsu (“Chinese-hand martial art”) to karate-do (“the way of karate,” or “the way of the empty hand”). He then defined the Twenty Precepts of Karate, and established a grand karate philosophy.
At last the way of karate had come into its own, and was gaining popularity all across Japan. The number of people wishing to begin training was growing daily-so much so that it became difficult to find a place for them to practice. So in 1939 Master Funakoshi established the “Shotokan” dojo, which he built at his own expense. (“Shoto” was the literary first name he used when doing calligraphy and writing poetry. “Shoto” means “Pine Waves,” and refers to the sound of wind blowing through the pines, which resembles the sound of ocean waves.)
Funakoshi Gichin Monument

By this time, Master Funakoshi had long been teaching karate to high-school and university students. As a result, karate clubs had sprung up at higher education institutions all over Japan-which is another reason why karate has become as respected as it is today.
In the air raids of World War II, the Shotokan dojo was destroyed, and the growth of karate came to a halt. But after the war, followers of Funakoshi’s way re-grouped, and in 1949 they formed the Japan Karate Association, with Funakoshi Gichin as Supreme Master.
On April 10, 1957, the Ministry of Education gave official recognition to the JKA, and it became a legal entity. A mere sixteen days later, at the age of 89, Master Funakoshi passed away. A large public memorial service was held at the Ryogoku Kokugikan (Ryogoku National Sumo Hall), attended by more than 20,000 people, including many famous names who came to pay their respects.
A memorial monument to Master Funakoshi was established at Enkakuji Temple in Kamakura.